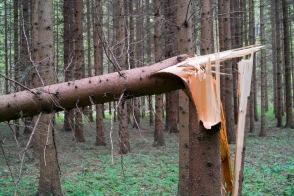 Philosophers and employment lawyers have pondered these two conundrums for years: (1) if a tree falls in the forest and no one hears it, does it make a sound? and (2) if an hourly employee works overtime, but no one is aware of it, is she entitled to overtime pay?

The Update is here to resolve both of these quandaries, once and for all.

First, yes, of course the tree makes a sound.  It’s a physical fact.  Cracking wood emits sound waves even when we humans aren’t there to hear them.  (Update drops the microphone, Bam!)

Second, no, overtime pay is not due if the employee performs the work secretly and against employer policy, so long as the employer is not made aware – actually or constructively — of the extra hours worked.  At least that was the answer of the United States Court of Appeals for the Fifth Circuit in a January decision, Fairchild v. All American Check Cashing, Inc. There the court decided the appeal of a manager trainee who claimed she worked overtime to “get the job done,” but did not report it to anyone. This extra overtime violated company policy that required advance authorization before any work was done.  Moreover, the employee could not show that the company had “constructive knowledge” of her alleged overtime work (an employer is liable to pay wages, including overtime, for any work that it “suffers or permits” to occur, even if not authorized), as she performed the work after she had clocked out, without informing anyone.

The employee claimed that All American Check Cashing “should have known” she was working overtime, because it had access to computer usage records that reflected her after-hours work. But the court held that mere ability to access such information is insufficient to show that the employer knew or should have known about the extra hours. Apparently the employee was unable to put forward any evidence that company management actually was aware of her overtime work, which is unusual in these cases.  Also harmful to the employee’s claim was the fact that she had reported and been paid for certain overtime hours.

So, some helpful takeaways from this walk through the overtime woods: